Invisible carbon monoxide can kill before you know what’s happening 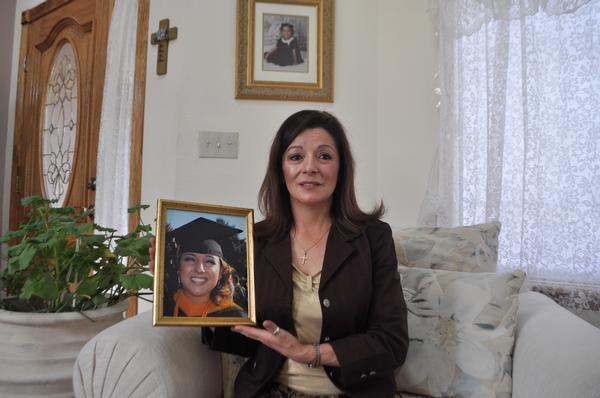 By Henrietta Masloff and Special to The Denver Post

That’s when I learned that this “silent killer” can take a life in minutes.

Ashley was home alone that night. She was doing laundry — sheets, pillowcases and a comforter — while talking and texting on her Droid 3 cellphone. Then, the phone battery died.

Ashley could not find her wall plug-in charger because it had ended up in the washing machine, wrapped inside her comforter. So she decided to use a vehicle charger while sitting in the front seat of my husband’s Honda Ridgeline truck. It was parked in our garage.

Ashley was not familiar with cars. Because she was completely blind in one eye, I was her driver for years, taking her to college classes at Johnson & Wales University, and later to her first job at The Weston Westminster.

She did know that she could charge her cellphone in a car. But after a smartphone battery has died, it takes several minutes for it to recharge enough to talk or text. Ashley’s phone took about 11 minutes to “come back to life” after the battery has died. Some smartphones require three to four hours to fully recharge after running out of juice.

The only way a car charger will work is when the ignition key is turned to the accessory position, so the phone can get a charge from the vehicle’s battery.

Our garage faces north, so on cold nights like that one, it gets even colder. As her phone was charging, my daughter turned on the vehicle for warmth.

Even though Ashley quickly turned off the vehicle, the fan remained on because the key was in the accessory position (for the phone charger).

I spoke to her about 10:30 that night, from the Ameristar Casino in Black Hawk, which I was visiting with other family members. I later learned from Westminster police investigators, as well as from my own inquiries, that Ashley’s last phone call before being overcome by the carbon monoxide that filled the truck cab was made at 12:30 a.m.

I found my daughter there in the garage the next day, slumped over in the passenger seat.

In the weeks since Ashley’s funeral on Dec. 30, I have talked to so many people about carbon monoxide and how it can take a life in minutes. Many educated, capable people never realized that some of the things they do “all the time” can be dangerous, like leaving their car running in a garage while dashing inside to grab something, or talking on the telephone in the garage while the car is parked and running.

I lost my daughter, but Ashley did leave behind a special gift, which I call her “Footprints.” I’m sure she was reclined in the passenger seat as she was talking away on her phone. A few weeks after she passed, I found them: her preserved footprints on the truck windshield.

I called Abra Auto Glass Co. The technicians gently removed the windshield, which was not an easy task. They showed me other windshields that shatter during removal. Despite the risk, they wanted to try to save my special footprints. They worked with such patience and care, and I prayed.

It worked because not only was Abra able to preserve the glass, the next day, the company owner called and said the job was free. Because one good deed deserves another, I donated the money I would have spent on the windshield to my church.

Now, my only hope is that someone will learn from our story and be spared the pain I’ve gone through. Then Ashley’s death will not have been in vain. She was amazing in her short 25 years and accomplished so much. She would want her story to get out.

Henrietta Masloff is a retired medical billing assistant. Since losing her youngest daughter, Ashley Kendelle Fritz, in December, Masloff has been on a mission to educate the public about the dangers of carbon monoxide.

$mart editor Elana Ashanti Jefferson contributed to this report. To reach her: 303-954-1957 or ejefferson@denverpost.com

DO have your fuel-burning appliances — including oil and gas furnaces, gas water heaters, gas ranges and ovens, gas dryers, gas or kerosene space heaters, fireplaces, and wood stoves — inspected by a trained professional and make certain that flues and chimneys are connected, in good condition and not blocked.

DO read and follow all of the instructions that accompany any fuel-burning device. Use the proper fuel and keep doors to the rest of the house open. Crack a window to ensure enough air for ventilation and proper fuel-burning.

DO install at least one carbon monoxide detector in the living areas of your home, preferably one on each floor.

DO know the symptoms of carbon monixide poisoning, which, even at moderate levels, includes severe headaches, dizziness, confusion, nausea or faintness.

DO get fresh air immediately.

DO call 911 or get to an emergency room immediately.

DON’T idle the car in a garage even if the garage door is open.

DON’T use a gas oven to heat your home, even for a short time, and DON’T ever use a charcoal grill indoors.

DON’T sleep in any room with an unvented gas or kerosene space heater.

DON’T ignore symptoms, particularly if more than one person is feeling them.

Make sure it is your carbon monoxide detector and not your smoke detector.

Ventilate the home with fresh air, and turn off all potential sources of carbon monoxide — an oil or gas furnace, gas water heater, gas range/oven, gas dryer, gas or kerosene space heater, or any vehicle or small engine.

Have a qualified technician inspect your fuel-burning appliances and chimneys to make sure they are operating correctly and that there is nothing blocking the fumes from being vented out of the house.

Avoid false security just because you have a carbon monoxide detector. Experts suggest keeping at least on on each level of your home.

In the United States, unintentional carbon monoxide exposure accounts for an estimated 15,000 emergency-room visits each year and 500 accidental deaths, according to the Centers for Disease Control and Prevention. Before Ashley Kendelle Fritz’s accidental carbon monoxide exposure at her Westminster home on Christmas Eve, two other high-profile incidents prompted Colorado lawmakers to pass HB1091, the Lofgren and Johnson Families Carbon Monoxide Safety Act, which requires all residential properties to have carbon monoxide detectors.

January 2009: Lauren Johnson, a 23-year-old University of Denver graduate student, died of apparent carbon monoxide exposure from a faulty heater vent at her south Denver apartment near the DU campus.

November 2008: The Lofgren family — parents ages 39 and 42, along with children ages 8 and 10 — died in their sleep while vacationing in a $9 million Aspen-area home. Pitkin County investigators concluded that a dislodged pipe from the property’s gas-fired Munchkin boiler filled the home with carbon monoxide. HB1091 became law less than a year later.

We would like to thank the Denver Post for this material. Visit Iowa State University on line at www.denverpost.com to view this complete article and other top notch news stories.